Mobilising Community Futures, or can/should/must we do away with hope?
23 May 2013, Birkbeck College, University of London
Organised by Johan Siebers and Michelle Bastian 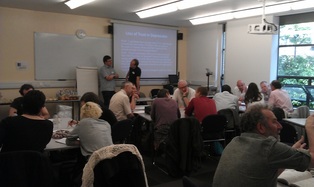 Expectations, visions, political and social agendas and their mediation in cultural formations are at the heart of community identity and of mechanisms of inclusion and exclusion. This suggests that developing new ways of reflecting on the changing nature of communities requires that we explore how communities relate to the future.

From the totalitarian constructions of programmatic, abstract utopias in the 20th century to contemporary models of concrete utopia, direct democracy and contemporary ethics of care based on the idea of community as always yet-to-come, hope plays an important role in the formation of concepts of political agency, community belonging, normativity and meaning. For some, hope is understood to be a necessary requirement for political and social change, without which the inspiration and drive towards action is missing. For others, however, hope is seen as a dangerously pacifying affect that stifles necessary action in the present and so must be done away with.
Finally we then identified key themes that we wished to discuss further, through the use of open space. These themes were:

Dialogue 1 - Hope and transformative politics – everyday utopias - Davina Cooper (Kent)
Care ethics, casual sex and the place of the future.
This talk will critically explore the place of temporality in thinking about transformative politics. Specifically, Cooper is interested in thinking about change as something other than an imagined future to bring into being, and to do so through the concept of everyday utopias. Everyday utopias are sites, already in existence, that seek to enact commonplace, daily activities in a more democratic, egalitarian or freer manner. Thus, their very presence implicitly troubles the notion that social change lies somewhere ahead. To focus this discussion, I will draw on the example of a women and trans people’s casual sex bathhouse in Toronto as a place of care/ ethics. In contrast to feminist care ethics and business ethics, which both tend to treat ethics as a set of directions or principles to be operationalized in pursuit of a better future, I focus on ethics as an intensive, non-instrumental engagement with the present, and ask what place such a present might have in thinking the politics of social transformation.

Dialogue 2 – Losing Hopes and Losing Hope - Matthew Ratcliffe (Durham)
Living without Hope: Phenomenological Reflections on Depression and Despair.
In this talk, I will discuss the results of a recent questionnaire study on first-person experiences of depression, in order to reflect upon what it is to live without hope. I will suggest that diagnoses such as ‘major depression’ are compatible with a range of importantly different kinds of hopelessness, several of which I will proceed to describe. Central to my discussion will be the overarching distinction between a ‘loss of hopes’ and a ‘loss of hope’, where the latter is not an extinction of however many intentional states of the form ‘I hope that p’ but an erosion, distortion or loss of the capacity to entertain such hopes. I show how loss of hope, in all of its various forms, involves a change in the experience of time and possibility.
Dialogue 3 – The stuff of hope – hope and materialism in contemporary thought - Peter Thompson (Sheffield)
Discerning a Hopeful Future
Alain Badiou has maintained recently that the real crisis we are facing as we move into the 21st-century is not a crisis of capitalism but the crisis of negation. By this he means that out of the objective possibilities offered by economic breakdown it does not seem possible to negate that negation in any sort of hopeful way. No concrete alternatives seem to be on offer and although there is a highly dynamic Occupy movement in the West and a movement for liberation in the Arab world, the shape that liberation will take and the nature of the society that will emerge from it is one which is still very much in the dark. The question I shall be posing in this dialogue is whether, after what appears to be a "darkness of the lived moment" as Ernst Bloch called it, we are able to discern a hopeful future. Hope in this sense does not mean merely a blind optimism but an educated hope based in a Hegelian concept of the unfolding of human liberation into a concrete process in which we only know that whatever is going to emerge is not yet possible but exists as a possibility. Is it possible to maintain hope in the face of apparently material impossibility and do we therefore have to revive concepts of transcendental hope and overarching narratives of human liberation? Is it time to rediscover the grand narrative of human progress?