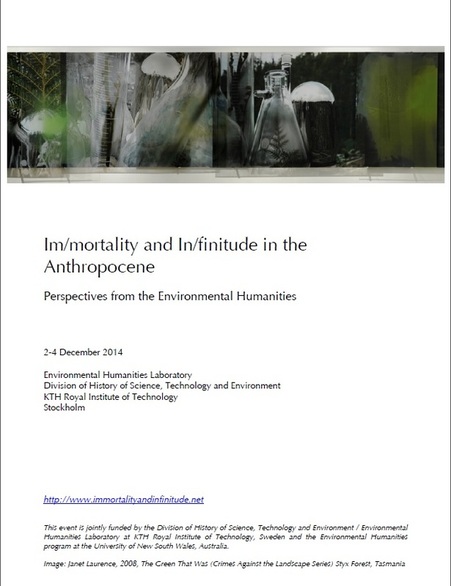 NB: THE SPECIAL ISSUE OF ENVIRONMENTAL PHILOSOPHY ARISING FROM THIS WORKSHOP IS NOW AVAILABLE

While the fear of capricious immortals living high atop Mount Olympus may have waned, the current age of the Anthropocene appears to have brought with it insistent demands for us mere mortals to engage with unpredictable and dangerous beings that wield power over life itself. Plastics, radioactive waste, fossil fuels and species extinctions have interpellated us into unfathomably vast futures and deep pasts, with their effects promising to circulate through air, water, rock and flesh for untold millions of years. Human time, geological time and a host of other temporal frames and possibilities confront each other in new ways, with little understanding on our part of how to find calibrations that might allow a reconciliation between them (Hatley; Chakrabarty; Bastian; Metcalf and van Dooren).

One consequence is that relationships between life and death, creation and decay have become uncanny; no longer entailing what was once taken for granted. The unravelling of inter-generational and inter-species relationships in the current mass extinction event shifts death from being a partner to life toward the ‘double death’ that amplifies mortality until it overruns life altogether (Rose). While at the same time, the finitude of acts of creation, evoked so clearly in Shelley’s Ozymandias, is no longer as certain as it might once have been. Instead, in specific, but crucial contexts, it is not the dissipation and silencing of our creative and technical works that is feared, but the threat that they might circulate endlessly (Masco; Morton).

The aim of our symposium, then, was to explore the shifting relationships between time, mortality and finitude in the context of the Anthropocene. Over three days we heard from an amazing array of speakers, created our own DIY exhibit, tried out Open Space and generally had a lovely time courtesy of our hosts at KTH.

To find out more about what we got up to, see our event programme (pdf) and our full list of paper abstracts. Attendee Hugo Reinert also curated an illuminating collection of tweets on storify [NB the Storify service is no longer available].

Click on the links below to listen to the audio