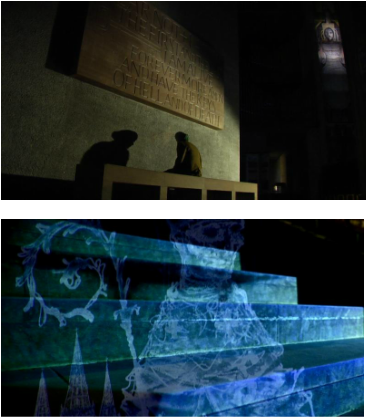 ‘Unravelling’- is a short film that is part of a AHRC/Goldsmiths University Methods Lab funded project-‘Noise of the Past’ .The film explores complex themes of: war & remembrance; loss & exclusion and colonial legacy in contemporary Britain. Through subverting normal methods of interviewing via a ‘call and response’ methodology- the film pursues an inter-generational ‘poetic dialogue’ in the Urdu language, between the director and his Grandfather Sawarn Singh- a War Veteran long residing in Coventry who as a soldier in the Indian Army fought for the British in WWII: Burma; The Middle East and Africa .

The film project works outside of traditional collaborative processes that subvert the usual researcher/director/composer working methods: Nitin Sawhney created a haunting score that was intertwined with the poetic dialogue-to which the visual narrative was created. The film used oral history layered with experimentation of archive footage, visuals and sound in creative ways to push the boundaries and establish new meanings around belonging, exclusion, memory, time, remembrance and memorials. The film premiered at Coventry Cathedral, thus inviting audiences to re-think how we can occupy such spaces by creating innovative platforms. Through poetic motifs the film offers a sensory immersive experience, inviting us to explore our own ambivalences towards collective and personal stories of war.

Whilst the film Unravelling was in production, Composer Francis Silkstone used the poetry as the basis of a new score Post Colonial War Requiem, which was performed in interaction within the space of the Cathedral. Benjamin Britten’s original War Requiem inaugurated the new Cathedral in 1962, offering Remembrance without militarism. Whilst consciously inclusive, it did not reference the contributions of the (now former) colonies. It casts a new spotlight on the stories of ex-colonial soldiers; it revitalises their status in the space of public remembrance, in a space that includes pacifists. Francis Silkstone chose to change just one line of poetry near the end of the work, inserting the word ‘Iraq’.

Noise of the Past Project Directors:

Francis Silkstone is an AHRC Fellow in the Creative & Performing Arts Music, Goldsmiths, University of London.